Once you've built and launched a campaign and all your initial messages have been sent, you may want to consider periodically releasing unhandled replies from inactive texters and making them available to active texters via the request form. It's easy for texters to forget to check their workflows regularly enough to make sure they are promptly responding to all of their assigned contacts. Releasing unhandled replies allows you to ensure that the people you're texting aren't waiting too long to get a response!

Note: Make sure you're familiar with auto-assignment before reading this article. You will need to be using auto-assignment for releasing unhandled replies to work properly.

There are two ways to release unhandled replies: manually or automatically.

To release unhandled replies across all of your campaigns simultaneously, go to the Campaigns page of your administration dashboard and click the Release Unhandled Replies button in the top right hand corner.

You'll then be prompted to choose how long conversations much have been idle for in order to qualify for being released. For example, if you select 1 hour, then only conversations that have been waiting at least an hour for a response will be released to the request form, while newer conversations will remain in their existing texters' workflows. This ensures that active texters are not getting their conversations taken away while they're still working on them! When you're ready to move forward, click the Release button. 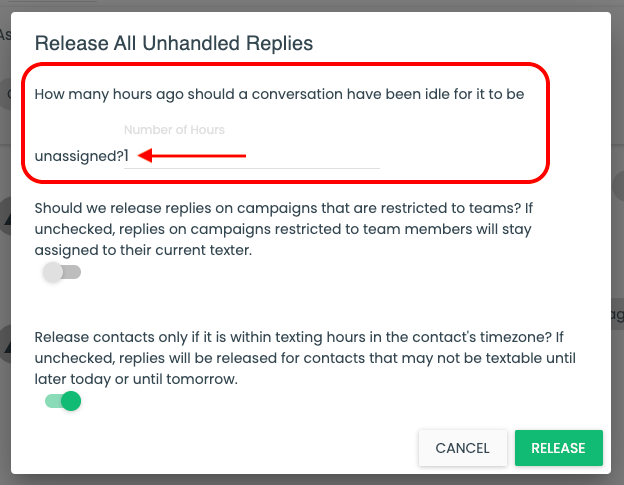 One Campaign at a Time

To release unhandled replies on just one campaign, go to the Campaigns page of your administration dashboard and select the three vertical dots to the right of the campaign in question to pull up the menu of campaign actions, then select Release Unreplied Conversations. Again, you'll be prompted to choose how long conversations much have been idle for in order to qualify for being released. Choose a time and click Execute Operation.

To automatically release unhandled replies to the request form, go to the campaign editor page of the campaign in question and open the Autoassign Mode window, then toggle the second switch on. Again, this will prompt to choose how long conversations much have been idle for in order to qualify for being released. But in this case, Spoke will automatically release unhandled replies according to that time interval for as long as the toggle is turned on. When you're ready, click Save.

This option can be helpful if you want to prioritize making sure your contacts get responded to as quickly as possible and when it's not important for the same texter to be interacting with the same contact for the duration of the conversation.

However, using this option means you'll have little real-time information about how many replies you have at any one moment, because they'll constantly be getting automatically unassigned. Also, texters may not like getting their replies so promptly taken away. If you're new to using auto-assignment, we recommend starting by manually reassigning your unhandled replies and getting a feel for things before experimenting with automatically releasing them.