Running a second pass is a great way to politely bump your initial message to non-responsive contacts. Done well, second passes see high response rates, save you time, and maintain the integrity of your data.

To run a second pass:

1. Confirm that all initial messages have been sent. This can be done from Message Review by filtering for the campaign name and Contact message status: Needs First Message. 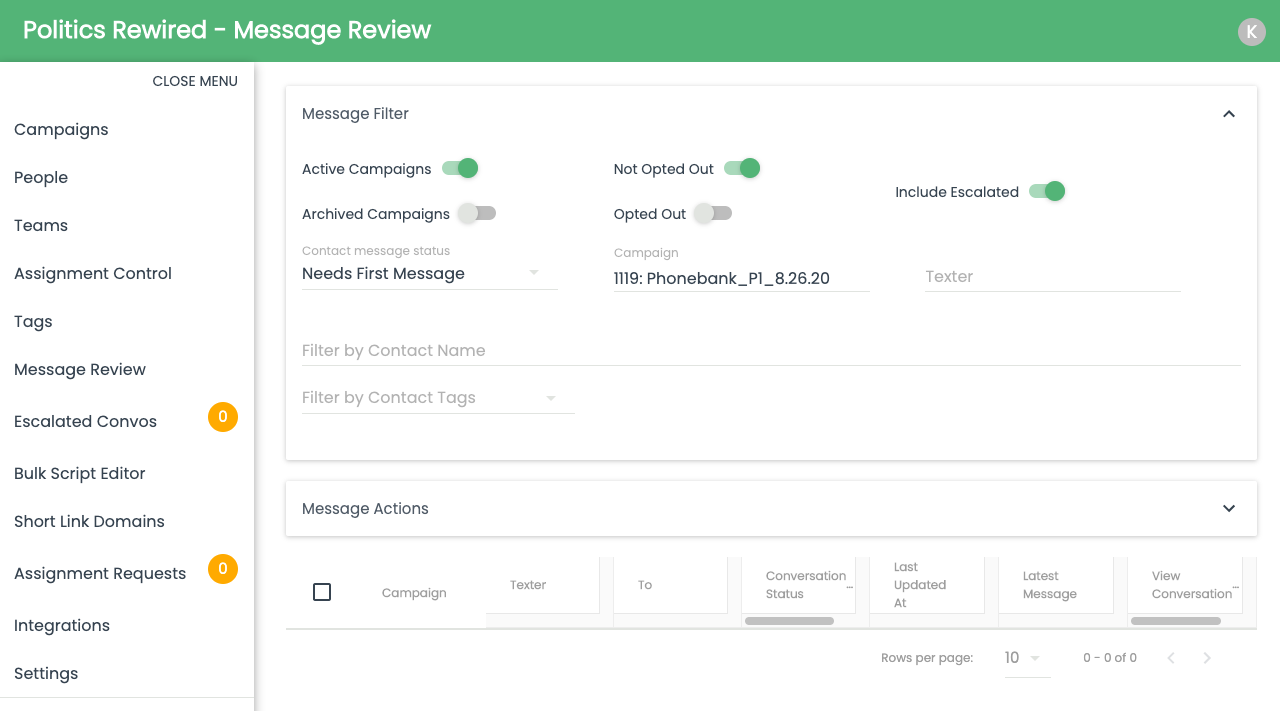 If you want to run a second pass but have outstanding initials, you can quickly assign and send them without worry that those contacts will be "bumped" on the second pass.

If you were to run a second pass without ensuring that all initials had been sent, the first message those outstanding contacts would receive would be your bump message! You should either confirm that all first pass initials have been sent or delete unmessaged contacts before moving to step 2.

2. From the Basics tab of the campaign settings page, update the title of your campaign to indicate that you're running a second pass. This could entail adding P2 or Pass 2 to your campaign title, or swapping one of those out for P1 or Pass 1.

For example, your campaign may initial be titled Phonebank_P1_8.26.20 and swapped to Phonebank_P2_8.26.20 before running a second pass.

From the Interactions tab of the campaign settings page, replace your initial message with second pass language. Best practices when crafting a second pass initial include removing {texterFirstName} and both shortening and reiterating your previous message.

For example, for an initial message that read "Hi {firstName}, it's {texterFirstName} with CANDIDATE! Election Day is one week away and it's all hands on deck to get CANDIDATE elected. Will you join us for a phonebank on DAY at TIME and help us reach every voter in DISTRICT?" you may consider a second pass like, "Hi {firstName}, just wanted to make sure you saw our first message! Can you join Team CANDIDATE for a phonebank on DAY at TIME?"

3. From the Campaigns page of the administration dashboard, select the three dots to the right of the campaign name.

Choose Mark for a Second Pass from the pop-up menu. 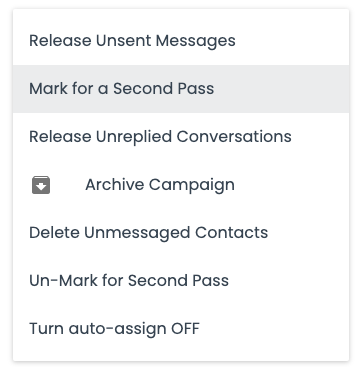 2. Determine a window of time to mark previously-messaged contacts. You can indicate both a number of days and a number of hours that have passed since a contact has last been messaged. It is a best practice to mark for a second pass when a contact has been messaged 16 hours ago or later; this gives contacts enough time to see and respond to your message and prevents oversaturation. If you choose to toggle off "exclude recently texted contacts," all contacts who have not yet responded will be marked for a second pass.

4. After executing the operation, you will see the number of contacts that have been marked for a second pass. It is typical for this number to be 80-90% of your initial list size, depending on the window of time that you've set.

5. From the same three dot menu to the right of the campaign, use the popup menu to select Release Unsent Messages. Skipping this step would mean leaving newly unsent messages in the workflows of the original senders, therefore preventing you from assigning those texts from the request form. 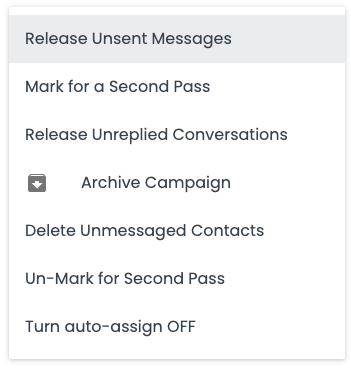 6. Confirm that your campaign is on Autoassign and that the request form is set to Initial Messages, or manually assign the new initial messages in Message Review!